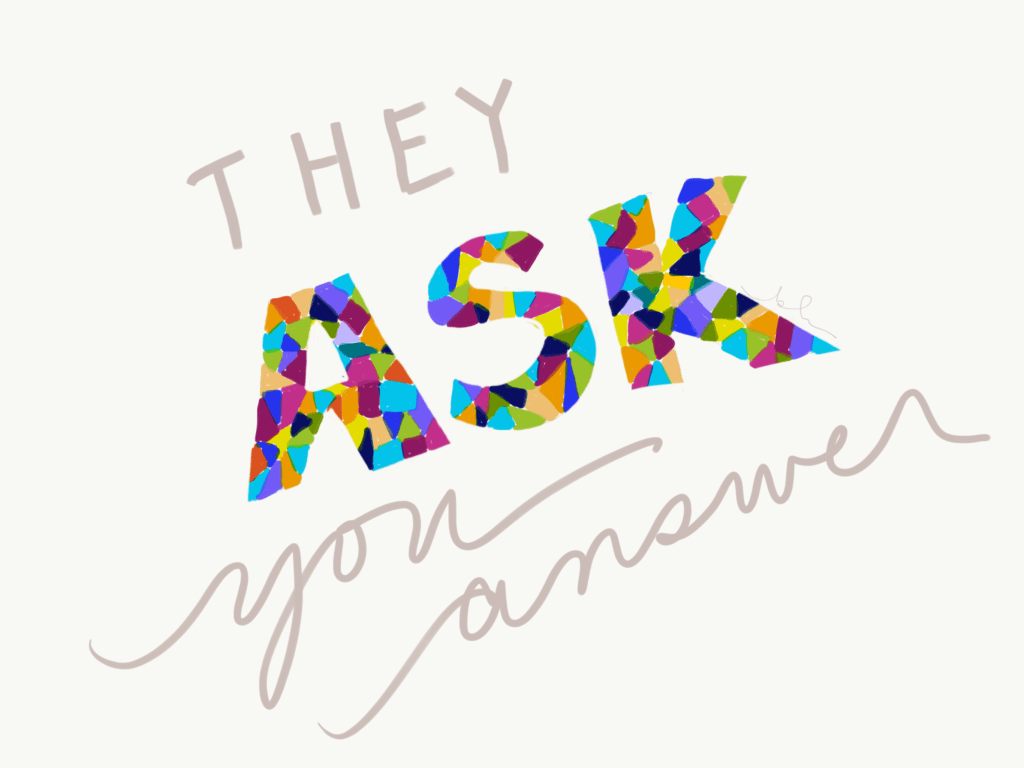 People hear things when they are ready to hear them.

This is a little story about someone who recommended a book to me….which I’ve been recommending to, like, everyone all the time everywhere. I thought.

It’s Saturday morning. My friend James texts me something he’s been thinking about, so i ring him and we chat about it.

I’ve known James since the day he decided to focus exclusively on accountants with his product GoProposal. He’s not only a colleague in the industry but also a good friend. He rings me every now and then, I ring him, we are honest with each other about things that are tough, we share ideas, books, stages, clients.

In the course of this Saturday morning conversation (really towards the end, kind of a throwaway comment) he says “yea so I’ve just found out about this book, it’s called ‘They ask we answer’ or something like that-”

And I interrupt him to say “are you JOKING ME??”

And I say well, it’s called “They Ask You Answer” and it’s only THE book on content marketing. I’ve read it several times myself. I’ve bought it for the whole PF team and insisted they read it. We buy it for clients regularly, or we tell them to buy it for themselves and their whole team. I give it away as part of the free bonus stuff every time I run the Accelerator programme.

“How in the world did you not know how much I love and recommend this book?” I ask him.

James started to apologise and I said no no mate, that’s not on you… I’m just wondering how in the world I thought I’d shared this with everyone and somehow I missed mentioning it to you!!

It’s happened a few more times recently as well. A client who didn’t know we were running the two upcoming events on “Accountants are creative too” in Edinburgh & Manchester.  Someone who didn’t realise PF was hiring, or that we’d hired a new person recently.

“How did they not know?” i wondered.

I swear i’ve mentioned these things so many times. In the case of They Ask You Answer, I almost feel like people are getting sick of hearing about it. I’ve posted articles, social posts, blogs. I’ve recorded videos. I’ve held up copies in webinars and video calls and sent amazon links. I would love to write a companion volume to it for accountants, but that’s for another day.

(For the record we do NOT get anything from recommending this book. It’s merely the best one I’ve ever seen for inspiring accountants to create content themselves – maybe because it’s not written for accountants, but just for business owners. Back to my story.)

I shared this on LinkedIn with some thoughts, and we all had a laugh about it, and guess what else happened.

Not everyone had heard about it yet.

Then James shared it on LinkedIn with all his peoples. (With a lovely little nod to me, to ask why I hadn’t recommended it before. Cheers James.) I felt a tad justified that there were a number of people who said yea, read it, so good….but again, more people who hadn’t. More people seeing it and saying “oh, I didn’t know!”

Why didn’t they know?

Why didn’t they see it?

I don’t know why.

One of the comments on my linkedin post was from Gail, who asked the question, “You are correct, people hear things when they are ready…how do we get them ready sooner???”

I saw the question and was about to say yea, let’s figure that out….and then I thought hold up a minute.

I’m not sure that’s the goal necessarily.

Because it doesn’t matter if someone hears something sooner. It matters more if, when they hear it, they are READY.

So the question becomes… how can we help them become ready to hear?

These Notes aren’t necessarily always written to give you the answer. They’re about what I’m thinking, and to get you thinking.

So what i’d love to hear from you today is….

….how can we help people to become ready to hear? What can we do (especially as business owners, service providers, accountants) to educate and encourage and listen and support?

And how can we make sure we have the best response? So when someone says “hey I just heard about this amazing concept/book/app/tool/company/product”, instead of thinking “hey i’ve been talking about that for years” (anyone read ‘Ego is the Enemy’? that’s for another time) – instead of that, we say “That’s so brilliant! What was it that really struck you? Why is it relevant now? How can I help you use it and share it?”

I’m thrilled James is reading this book – because he’s got a massive following of accountants who want to run their businesses better (accountants who want to think like a person and a business owner first, and an accountant second). And he’s an inspiring person. People listen to him and well quite frankly they do what he says. So if James says read the book, they’ll read the book.

And they’ll be inspired.

And that, my friends, is absolutely the point.

It doesn’t matter who told them about it. It matters that they discovered it, and better still that they read it.

Or have their life and business changed from it.