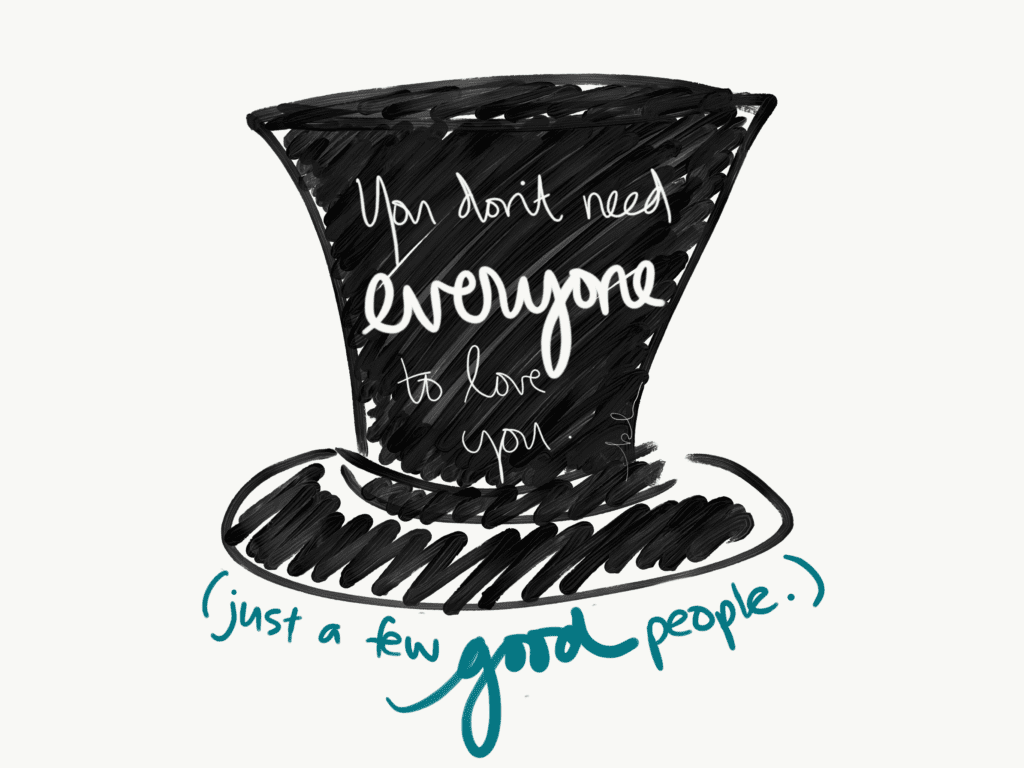 The Greatest Showman is one of my favourite films. It’s got catchy music, a great cast, and a solid message about not letting business and money take over.

And it’s got some good solid quotes that made me stop and think, especially this one when Hugh Jackman’s character is rushing off to yet another round of events and shows, and his wife is asking, when will it ever be enough?

And she says, gently:

“You don’t need everyone to love you. Just a few good people.” Video

I’ve started to notice that message in a lot of different places lately. And I’m grateful to be owning and running a business in a time when people are realising the cost of the hustle.

Even Gary Vaynerchuk, the King of Hustle himself, has started to share more content that says , yes use your energy, be driven, spend every second….but only if you want to. If that’s what you’re good at. If you’re young and have more energy than you know what to do with.

I’m guessing Gary Vee, as he gets older, is realising you can’t hustle nonstop. Or if you do, there’s a cost to the hustle.

There’s a cost to your business. Your team. Your family. Your own mind.

I’ve been running my business for seven years. In the first few years, it was constant hustle. Working until midnight more nights than not. Checking emails continuously. Responding almost instantly to client requests. Panicking if something looked like it might not be done on time. Going to all the events myself.

Then things started to change. I started building a team, and they were coming with me to events. We did more together. We all hustled and hurried and responded to clients instantly.

But now things are different: and I’m thinking it’s even possible they could have been different before (but that’s another Karen’s Note – on how there’s no point wishing you learned something before, because when you learn it is the right time to learn it).

I don’t have to be ‘on’ every moment.

I don’t have to go to every event myself, do everything “everyone else” is doing (they’re not by the way).

I was at Quickbooks Connect this week in San Jose. I attended for the first time last year and was pleasantly surprised. Although this year they didn’t invite me to come as an influencer, and my bids for speaking weren’t accepted, I still decided to pay my own ticket and my own travel, and go. (They did invite me to run Braindates, which I truly enjoyed!) I even brought a USA team member with me. I value the people, the connections, the one on ones, the focus on community.

Their speakers are world-class, too. They had Jennifer Hyman of Rent the Runway, which I hadn’t heard of before the event, but it’s an incredibly fast growing business that is only growing more and more.

They had Ashton Kutcher himself (I like how i say “himself”, as if there are so many Ashton Kutchers you might not know which one I’m talking about). But it did feel surreal to see him walk on the stage not far from where I was sitting, since I’ve seen him in a lot of films and online everywhere! In addition to being an actor, he’s also an investor and was there to talk about investing and new businesses and social media.

And the event is held in San Jose. Silicon Valley itself. In addition to being in a massive conference centre with 5,000 other business owners, even walking from my hotel to the venue every day I would see big massive buildings with names of companies I know well, like Adobe and Zoom.

So I was surrounded by places and people and talks that pointed me to big business. Billion dollar businesses. Fast growing tech businesses. Celebrities. Or even celebrities in their own arena (people like Katie Linendoll, who I confess I also hadn’t heard of before this week, but as a side note I just LOVE her personal brand style. Those glasses and funky outfits!!).

In the past, especially whilst being really driven to grow PF, I would be really inspired by that. I would think bigger is better and serving more clients is the goal. And getting to £1 million turnover and having big, swish creative agency offices.

But as I listened to the talks, and walked past the big buildings, and talked to people individually, I wasn’t really inspired by the big business element very much.

I think it’s great that people build big businesses. I’m forever grateful for Apple (as I use my apple watch to sign in automatically to my imac so I can type this, and airdrop the sketchnote from my ipad). I’m so thankful for apps like Zoom and Adobe and Loom (that last one Ashton mentioned specifically as a company he’s excited about).

But I don’t have to be them.

Ashton Kutcher is recognised by everybody: but he’s not known by everybody. He, and every celebrity or well known person or world renowned business owner, is known and loved by a few good people.

Over the past three weeks I’ve attended or delivered four events, with at least six networking/dinner events connected to them (and I didn’t even get to a quarter of the ones I could have).

And as I met people and re-connected with others and was around business both big and small, it struck me that I, and my company, are in an incredibly privileged place.

We aren’t a billion dollar company. We have a core team of 7, not seven hundred or seven thousand. The team works remotely, and we don’t have offices. We serve only accountants, and only a certain kind of accountant (the creatively minded, entrepreneurial accountant who lives up to the PF values personally and in business).

The circle is small.

We aren’t loved by everybody.

We’re not even loved by every accountant.

But we are loved by a few very good people.

There are clients who literally changed their plans so they could be at events we were running, even at the very last minute.

There were people who waited ages to make sure they could talk to me, or sent messages by multiple mediums so we didn’t get lost in the events and forget to actually talk.

There was someone who ran into me as I was walking back to my hotel late one evening, and we started talking marketing, and then he stopped to say “Is this okay? Do you have time and energy for this right now?”

There was an accountant who’d never met me, but who was told by one of our clients that she had to meet me. So she set up the Braindate, and literally left Ashton Kutcher’s talk early to make sure she would be on time to see me.

There are the core PF team, who although they are employees have a business-owner attitude towards supporting PF. Including our graphic designer in the UK who didn’t go to bed until she made sure I had the image I needed (because we were on wildly different time zones). Or a client marketing manager who went to all the extra events and parties we’d agreed to go to, and made an effort to talk to people and be interested in them, even though I know her preference would be to sit quietly with a book.

There are partner companies we are privileged to do things with, like GoProposal, who sponsored at the Thriveal Deeper Weekend event simply because I told them it was one of the best events they could ever be involved with, hands down. Who in their sponsor talk, gave a list of all the companies their app integrated with, and specifically included PF as “a company whose philosophies we integrate with”. PF isn’t an app as such, so I wouldn’t have thought of saying they integrated with us, but it was a perfect way to share the fact that we value the same things, and that’s what matters. (Cos remember, values are everything.)

And there are the 280 people who get these Notes and actually reply back when they get it as an email about real things going on in their lives, and thank me for what I’ve shared that has helped.

But they’re good people. And they love me, and PF, and I’m so incredibly grateful for that.

A final point: not everyone has the kind of business I have – and not everyone wants it. Some people want to work on their own and never have any employees. Some people DO want to start billion dollar businesses and will try anything to get Ashton Kutcher to invest in their next startup idea.

There are people who need to start Apples and Quickbooks and Xeros and Amazons.

That’s great. I’m so thankful for those kind of people!

But even for the founders and leaders of those big companies, this one truth still applies. Even they only need a few good people to love them. Even if everybody uses Google, or “everybody” uses Amazon, customers don’t love the human being who created it: they simply like what they get from them.

And if the praise of the crowd (or their disappointment if you’re not there) rises higher than that of the few good people, something’s wrong.

What i’d love to hear from you today is…

Who are your few good people? Other than your family, who are a few good people you’re grateful for, and how are you doing at prioritising them over business or work?